Top Stories
Edible Mountain
Edible Mountain is a bite-sized, digital series from WVPB that showcases some of Appalachia’s overlooked and underappreciated products of the forest while highlighting their mostly forgotten uses.

This forgotten fever remedy was once one of the most popular medicinal herbs used by herbalists in Eastern North America.

Also called break bone fever, it’s leaves can be used steeped as a tea and taken as warm as a person can stand to break a fever.

Some folks in Appalachia would simmer it with lemon and honey to make a cough syrup.

Boneset was also combined with elderberry and used with great success by some doctors during the influenza outbreak of 1918-19.

It’s popularity has faded over the years and is now considered a weed.

A key way to identify boneset is that its stem grows through the leaves.

In the early days of herbalism visual observations like this would influence what it was thought it would cure. In this case it was believed that wrapping a broken bone in the leaves of boneset would help cure the break. Of course this was not true but this is how it got the name boneset.

While it doesn’t fix bones, the fever remedy works very well. It’s worth having a boneset tincture in your apothecary for this reason.

Do mind that white snakeroot has very similar flowers and can be mistaken for boneset. White snakeroot is deadly poisonous so please be sure what you are harvesting.

In the video below, 👇🏼Barbra Volk gives us info on how to ID identify it and makes a simple boneset tincture. 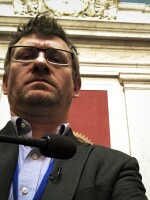 Chuck Kleine
Chuck has been producing for WVPB 20 plus years. With an emphasis on Appalachian folklore and the uses of wild plants and animals Chuck’s most recent production is Edible Mountain which explores wild edibles through out the region.
See stories by Chuck Kleine
Discover The Impact Of WVPB
Learn More
WVPB Media App
Learn More
Latest News
WVPB Passport
All six seasons of Downton Abbey now available.
Hundreds of PBS Shows. On your schedule.
Learn More
It's the power of community.
WVPB is local news, education, music, and entertainment for West Virginia.
Your donation today will help keep us strong and vital.
Donate Now
Related Content