This story originally aired in the Sept. 2, 2022 episode of Inside Appalachia.

At a little past 5:30 p.m., the gravel parking lot of Cuz’s Uptown Barbeque is full of cars, vans, trucks and motorcycles. Customers line up outside this big purple, orange and blue barn with its attached red-brick silo, sitting just off the edge of a four-lane highway in southwest Virginia.

It was selected in 2019 by World Restaurant Awards as one of the top 28 under-the-radar restaurants in the world, and it doesn’t take long to find out why.

In front of the restaurant’s entrance, two life-size ceramic pigs stand like sentries. A pig in a tutu stands on top of the gatepost. The front door is still the original double-hung oak door of this former dairy barn.

Once inside, paintings of pigs morph into dragons. Red, pink and yellow Chinese lanterns hang from the dining room ceiling. There’s a string of masks and cartoon figures running the length of the bar. It could easily be a folk art museum.

“When we first opened in 1979, we had four tables,” said owner Yvonne Thompson, “and there were lines out the door on the porch.”

The lines still go out the door. People arrive by all modes of transportation — from hikers on foot, to CEOs that come in by helicopter. The cashier rings up tabs under the eye of a life-size polar bear, and busboys maneuver around paper mache pigs.

“Of course we’re into pop culture — Pee-wee Herman, Superman, Hulk Hogan, Elvis,” Thompson said. Most of this art was either drawn, painted or curated by Thompson’s late husband Mike, an art history major who co-founded the restaurant.

Other art in the restaurant came as gifts from customers. Like a life-size cutout of Elvis in pink overalls, holding a pig in his arms.

“Somebody stole that one time. It was sticking out of the convertible as they left the parking lot. But then they brought it back a few years later. They felt bad. See, everything in here has a history,” Thompson said.

Part of that history begins in Hong Kong, where Thompson was born and grew up. She wanted to go to college in the United States.

“And my uncle had a really good Chinese restaurant in St. Louis, Missouri. He was my sponsor, so I came and started working from day one,” Thompson said. Her uncle was Liang Wong, who ran the well-known Lantern House, once featured in Esquire magazine.

He not only taught her about restaurants, but he also taught her life lessons. Like the time Thompson saw an employee put sugar in her purse.

“I said, ‘Look, Uncle, she's taking sugar from you.’ He said, ‘Look away, look away.’ He said, ‘She's my best cook, my best worker — she can have my sugar.’ Think of that lesson,” Thompson said.

After graduating from the University of Missouri in journalism, she moved to Richlands, Virginia for her first reporting job, and met and married Mike Thompson. It was Mike’s cousin who suggested they start a restaurant in Mike’s old family barn sitting empty by the road, so they named it “Cuz’s.” Barbecue was hard to find back then so the name became Cuz’s Uptown Barbeque.

“If he was the only one running it, it would probably fold in a year, because he didn't know how to run a business,” Thompson said with a laugh. “You know, I'm the business person and have the organization and the skills. But he was the flair, the fun part. That's the yin and the yang. He’s the yang, I’m the yin.”

Yvonne’s husband Mike died in 2018 after an accident on an electric bike. Thompson thought strongly about retiring. But she knew how Cuz’s had become so much a part of the community’s life and she thought Mike would have wanted her to carry on.

“He would never not speak up and he's probably still speaking up to us from down from the grave. Saying you guys better make it right. He was a character. But that's why Cuz’s is the way it is,” Thompson said.

Open the menu and you’ll see his humor in the food descriptions. Like the macaroni and cheese, you can order either plain or “skanky.” That was the word that Thompson said just came into Mike’s head, when he needed a way to describe blue cheese.

A Family Behind The Scenes

Preparing items on the menu starts early in the morning. Cuz’s staff make their own mayonnaise, hand chop their own garlic and fresh ginger, and peel their own potatoes — on the order of 500 pounds a week. Thompson works alongside her staff, making a pie crust from scratch. Everyone is surrounded by colorful mosaic tilework and funky art.

Many of Thompson’s staff have been with her for decades.

“Praise for the older people, they know how to work,” Thompson said.

From Baby Boomers to Gen Z, Cuz’s staff of 34 workers call each other family — figuratively and literally. Like 65-year-old dishwasher Judy Conley, who works alongside her 21-year-old niece Megan Dye. Conley remembers Dye as a baby.

“When they first brought her to Cuz’s, she was about this long, and I got to hold her. And now I’m working with her,” Conley said.

Thompson said one part of her staff — the busboys — does turn over frequently. “They're the ones I'm really proud of, because I feel like this is like a passage. They learn how to work hard and save up their money. I have probably hundreds of busboys that have gone through this place. I felt like I've raised them. Some of them have become physical therapists, lawyers, FBI agents, commercial pilots, sheriffs, nurses, teachers. I'm so proud of them,” Thompson said.

On Mondays, when the task is to make 1,000 egg rolls, the kitchen crew becomes the kitchen brigade and anyone can get recruited to help. Egg rolls have been on Cuz’s menu from the start. The dipping sauce recipe came from Thompson’s uncle. But the version that Thompson calls a Southern Chinese egg roll came later.

“Actually one of our old staffers came up with the idea. She liked cheese and she wanted to put a slice of cheese, and the thing that was around was Velveeta. And after we tasted it was like, ‘Wow, that's good,’” Thompson said.

Back by the grill, the brick ovens and barbecue smoker, award-winning chef Mike Oder, known as Chef Mikey, has just finished cutting up steaks. He’s worked at Cuz’s for 38 years, and now he’s also Thompson’s business partner. He is proud of how the staff work together.

“Everybody comes in and sees what needs to be done and goes ahead and does it. Everybody here’s got their own personality. We all click good. It’s like a family,” Oder said.

Part of Chef Mikey’s job is passing down techniques and shortcuts to the younger guys cooking the meats. Like Taylor Hamilton.

Hamilton started working when he was 15 years old. He has a degree in applied mathematics from Radford University, and he chooses to work here rather than use his degree to teach.

But his coworkers give him a hard time about applying his math in the kitchen.

“Simple math ain’t really my strong suit. Just like calculating how much of what to put into stuff to tone it down to a smaller recipe, I can’t. It just makes me think too hard. I’d much rather do some calculus than break some tablespoons and teaspoons down. So I’m always like ‘Mikey will you do this for me?’ Cause I’m confusing myself trying to figure it out,” Hamilton said.

He gets satisfaction out of working here.

“I love the rush that you get. Like when you get 20 steaks filled up on your grill and everyone’s screamin’ at you — I love it. Just making great food for people, and them telling you they enjoyed it. Knowing you made that. It’s a lot of reward,” Hamilton said.

Stepping out the back door, Oder points out the restaurant’s garden, not far from the highway. In a good growing season, Thompson said it allows Cuz’s to serve exceptionally fresh food — like the corn.

“We would pick them the day we use them and you can't hardly buy corn like that; it’d be several days old at least,” Thompson said.

Thompson said Cuz’s tries to conserve their garden efforts to only grow things that they cannot buy, like squash blossoms, blackberries and heirloom tomatoes. One heirloom is special because the seed was a gift from a customer, Kathy Hypes, whose family had grown it locally for over 100 years.

Cuz’s customers and Cuz’s staff stay connected with each other in the community, even when the restaurant closes for the off-season, from late November to March.

Keisha Norris, who’s been eating at Cuz’s since she was a kid, said she applied to waitress when she was in high school and found herself working alongside a familiar face, Sallie Bowen, her physical education teacher in school.

Over the years it’s these kinds of community ties that have sustained Cuz’s and been part of its resilience — most recently, through COVID-19 sicknesses in the spring of 2022.

Customer Wanda Lowe said that when the restaurant closed when several employees were out sick, she offered to step in and help. “There's a group of us told them we can wash dishes, we will prepare salads, we can clean tables — anything to keep from closing, ‘cause it’s so good.”

Browsing through the public library’s county cookbook, Thompson saw one of Cuz's recipes, along with histories of restaurants.

When asked what she would want Cuz’s to be remembered for, she said, “I would say, treating people the way you want to be treated, walking in their shoes. Maybe it’s like an older philosophy. I think maybe the two words that sum up this place are passion and compassion. And a heart. And, to me, that's the starting point of a good business.”

Lowe remembers another time when Cuz’s was forced to close.

In 2008, a fire destroyed large areas of the kitchen. It damaged the roof, wiring and furniture. It was actually the second time a major laundry-related fire had spread through Cuz’s. It brought back the memories of the first fire only eight years earlier and the feelings of despair. Thompson and her husband Mike, along with many of the staff, stood watching the flames, wondering if this fire would threaten to close the book on the restaurant’s history.

Thompson’s son Arthur had been home for the summer, after just graduating from the College of William and Mary.

“And he came to us while we were standing outside seeing the place burning down. He said, ‘You have to rebuild. This is our legacy. I will stay and help rebuild this place and not take a job until you can open back up.’ So he stayed and worked through the winter. And then he left when we were able to open the door,” Thompson said.

The FolkwaysReporting Project is made possible in part with support from Margaret A. Cargill Philanthropies to the West Virginia Public Broadcasting Foundation. Subscribe to the podcast to hear more stories of Appalachianfolklife, arts, and culture. 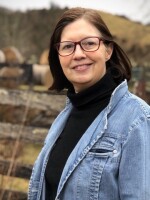