Shane Foster is one of those folks who always had strong memories of quilts during his childhood.

“It’s just something that was always in my family, my great-grandmothers on my mom’s side,” Foster said. “Both were quilters. They had done it for years, decades. And I always had a quilt on my bed growing up. So I just assumed that everybody had. When I grew up and learned that they were down comforters and things like this, I had never really experienced that, because we just always used a quilt that had been passed down from one of our great-grandmothers.”

As time passed, the matriarchs in Foster’s family had stopped making quilts. This was a result of lack of interest or passing away. Foster realized that the tradition might die out within his family.

“I’ve said for years that I wanted someone in our family to start quilting,” Foster said.

But no one did, until Foster himself contracted COVID-19 in 2021. He recovered well, with the exception of some lingering post-COVID symptoms like anxiety and high blood pressure. His family doctor suggested he find something that would allow him to de-stress. With that news, Foster figured it was time. So he began the journey of learning how to quilt.

There was just one problem: Foster had no guidance from his grandmothers to teach him their craft. The solution? YouTube.

“And it really helped me through it,” Foster said. “I think in a way, it’s like having somebody there showing you how to do this. Like if I had learned from my grandmother, and my great-grandmother, saying, ‘No, this is how you do this and then I’m going to show you how to do this part.’ But it’s on demand, and it’s in a way that is easily accessed by anyone.”

Shane Foster’s story stirred the question: If you learn an art from YouTube, is it still Folk Art?

“We always use new technologies. If a new technology emerges, it is against human nature to not wonder if maybe it could make your life a little bit easier,” Van Buren said.

She has spent a lot of time thinking about the ways people pass on traditional practices.

“It's very romantic to kind of think that every tradition bearer has or should come to their practice through the same route and that that route always has to start with somebody in their immediate community or family, kind of sitting them down and having that knee to knee teaching moment,” she said.

Van Buren says today’s practitioners grew up with the internet at their fingertips, and that they’ll eventually become our elder culture keepers.

“We had a very cool project at the North Carolina Arts Council that is ongoing, but it was the Millennial Traditional Artist Project, and one of the big questions was: ‘What do we do for and with the digital generation and how?’” Van Buren said. “How does the access to digital technology, to mass communications, to YouTube, to social media, change the way that we talk about traditional arts and how they’re taught and how they’re learned?”

Besides, the digital world has strong connections with the real world. Just look at Shane Foster. He learned how to quilt from YouTube videos, but that knowledge has allowed him to connect with a real-life quilter: his great-grandmother. She passed away many years ago, but Foster is now working with fabric that his great-grandmother cut out for a quilt that she never finished.

“Now I'm taking those pieces and I’m honoring her memory and doing it in the way that she intended, but also putting my own twist on it by using some fabrics that I chose,” Foster said. “And so it did come together with this. This amalgam of different fabrics to make it kind of a combination work between her and me.”

Now that Foster has many projects under his belt, he’s looking forward to exploring the quilting medium as a source of artistic expression. All, of course, with a nod to both great-grandma and YouTube. 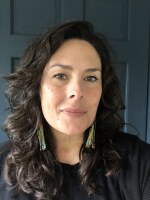 Liz Pahl
Liz Pahl is a musician, filmmaker and storyteller based out Southeast Ohio. She has spent 20 years building her career engaging in creative endeavors, event production, project management and leadership development. She continues to hone the craft of storytelling through writing, filmmaking and audio production. Her most recent documentary film project, Legacy: Women of Southeast Ohio, highlights the lives of four matriarchs in Southern Ohio who have dedicated their lives to community action, social justice, activism and education.
See stories by Liz Pahl
Discover The Impact Of WVPB
Learn More
WVPB Media App
Learn More
Latest News
WVPB Passport
All six seasons of Downton Abbey now available.
Hundreds of PBS Shows. On your schedule.
Learn More
It's the power of community.
WVPB is local news, education, music, and entertainment for West Virginia.
Your donation today will help keep us strong and vital.
Donate Now