How Black Musicians And Luthiers Are Reclaiming The Banjo

The banjo, an instrument closely associated with mountain music, originated in Africa and came to America with enslaved Africans. In the 1830s and 1840s, it was taken up by white musicians and became a staple of minstrelsy, a form of racist entertainment in which white performers—often in blackface—depicted stereotypes of Black Americans. Eventually the banjo crossed fully over into white public culture and was separated from its African roots and identity. Now, there’s an emerging movement of Black musicians who are reclaiming the banjo and taking the instrument—and its sound—in new directions.

One of the most well-known of those musicians is Dom Flemons. He’s mostly known for his membership in the Carolina Chocolate Drops, an all African American string band formed in the early 2000s, an era when Americana music was gaining a wider audience.

Many of the band’s songs are drawn from the 19th century, when the banjo was just being introduced into white popular culture and music through minstrelsy. A century later, Flemons and the Carolina Chocolate Drops dug into that difficult history.

“I just saw that there was a need for new African American representation that could present some of the older material, but at the same time not pandering to any sort of backward thinking or anything like that,” Flemons said. “We were always very 21st-century and you know, urban, hip, thinking about, ‘Where does the music go from here?’ instead of trying to be relegated to something in the past.”

A younger generation is picking up the banjo, too.

Byron Thomas, who works for a public school system in Maryland, became interested in the banjo after reading a story in an old Boy Scouts magazine about a formerly enslaved man who made a banjo from a cigar box.

“Just finding that article was the thing that brought me to the banjo just because at that point in my life, I [thought], ‘The banjo is just a white instrument,” Thomas said. “So I did not really have any kind of inclination to play the banjo at that point until I was like, ‘Huh, wait a second. What do you mean that there was a former slave playing a banjo?’ Now I have to figure out what in the world was going on and what has happened. Because now I'm very curious as to why in modern culture—mainstream, at least—we don't see any Black people really playing banjo in front of us.”

Thomas has since researched banjo history and learned to play old tunes. But he also sees the instrument as a living thing and has a growing interest in learning to build banjos from a Black luthier.

Dena Jennings is a medical doctor, conflict therapist, and gourd banjo builder who grew up in Ohio. Her family has Appalachian roots.

“My mom grew up in a hollow in Kentucky in the Cumberland Gap area,” Jennings said. “And what I didn't realize when I was growing up, we were heavily involved in the Pentecostal church and all of our friends and family and others were from that region of Cumberland Gap. It was pretty much like the hollow during the Great Migration—and a lot of Black families moved from the South to the North—it was almost like that hollow unscrewed itself like a light bulb and screwed itself in Akron, where jobs were.”

Jennings’ gourd banjos are pieces of art. She grows and selects the gourds on her farm in Orange County, Virginia and uses hides to create the heads. Her banjos have an earthy, bassy and funky sound. She said she was amazed when she first learned that the banjo started as a gourd instrument.

“I used to make an annual trip to Elderly Instruments in Lansing, Michigan—it wasn't far from Akron. So I'd go up there and look around at the instruments that I either couldn't play or couldn't afford, and at least look at them and then get in the car and come back. But one year I went and I saw this amazing banjo. And it was a simple rim banjo with a simple goatskin head and simple nylon strings on it. And when I took it off the wall and plucked around with it… the sound was like honey from a honeycomb. It was just so warm and so rich and I said, ‘I need to know more.’”

Jennings feels she has a role to play in fostering a safe space for people who want to explore the history of the banjo, especially Black people exploring the Black history of the banjo. She hosts an event for banjoists called the Affrolachian On-time Music Gathering. 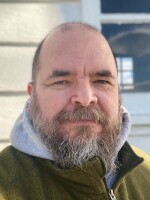 David Wooldridge
David Wooldridge lives in Lowesville, VA. He began working at Appomattox Court House National Historical Park in 1995 where he now serves as the park’s Museum Technician. He has played and studied the early banjo for over 25 years. He is passionate about telling untold stories.
See stories by David Wooldridge

Kelley Libby
Kelley Libby is a Virginia-based public radio editor and producer. She currently edits for Inside Appalachia and its Folkways Reporting Project at WVPB. You can reach here at kelleylibby@gmail.com
See stories by Kelley Libby
Discover The Impact Of WVPB
Learn More
WVPB Media App
Learn More
Latest News
WVPB Passport
All six seasons of Downton Abbey now available.
Hundreds of PBS Shows. On your schedule.
Learn More
It's the power of community.
WVPB is local news, education, music, and entertainment for West Virginia.
Your donation today will help keep us strong and vital.
Donate Now
Related Content