On a bright, sunny day in mid May, my mom pulled up on a gravel road near H.E. White Elementary School in Bomont, West Virginia. A man was waiting, and he stepped up to the driver's side.

“Are you looking for ramps?” he asked.

“We sure are,” she replied.

Tucked in along Porter Creek in Clay County, West Virginia, about seven miles from Clendenin, Bomont is home to one of my mother’s favorite ramp dinners. She was especially anxious to get to this year’s event because the COVID-19 pandemic meant many ramp dinners were cancelled.

This year’s dinner was still different. It was a drive-through affair because some pandemic restrictions were still in place. Cars lined up on the road leading up to the school, where Principal Jamela Krajescki greeted drivers and took orders. A small tent was set up in the shade, where community members sold sassafras tea by the gallon. You could also pick up freshly dug roots to make tea at home.

“It’s ladies day out,” said Krajescki, greeting my mom and her friends. “I love it.”

A few minutes later, my mom and her buddies convinced the folks in charge to let them set up at a picnic table. They dug into takeout containers full of ham, beans, potatoes, and ramps, carefully removing cornbread from tin foil wrappings. As they ate, I started thinking about what’s involved in putting on a dinner like this.

How many ramps did it take?

Principal Krajescki told me the dinner at Bomont takes 75 milk crates full of ramps each year. And the entire community is involved in the dinner.

“We have every single person, usually female, usually over the age of 55 or 60 in our gym all week long, sitting at the tables, cleaning those ramps, crate by crate, by crate,” she said.

That’s a lot of ramps.

And there’s been a lot of conversation in recent years as ramps have become popular among food aficionados in larger cities outside of Appalachia. Some experts worry that the plants are being overharvested due to rising demand.

That’s why places where ramps grow, like the Monongahela National Forest in West Virginia, have guidelines in place to protect against overharvesting.

Amy Lovell, an ecologist with the U.S. Forest Service, says ramps can only be harvested for personal use in the forest. And there are limits.

“Personal use is defined as two gallons per person in possession at any one time,” Lovell said.

That’s about what fits in a plastic grocery bag from Wal-Mart or Kroger. Lovell says the other rule of thumb for ramp harvesters is to leave most of the patch unharvested.

“We recommend that you only take about one-fifth or 20% of the plants within a patch,” she said. “And if there are fewer than 100 plants in a patch, we encourage folks to find another place to dig them.”

Although he lives in southeast Ohio and harvests ramps in patches there, chef Matt Rapposelli essentially follows forest service guidelines. Rapposelli is executive chef at the Inn at Cedar Falls in the Hocking Hills area. He’s also the author of the cookbook, A Taste of the Hocking Hills.

“I use about three paper grocery bags full of ramps each year for recipes,” he said.

Rapposelli gets ramps at local farmer’s markets when they are in season, and sometimes he forages for them himself.

“I just go along and I take a little pair of shears and I just snip and collect them and bring them back,” he said.

Rapposelli doesn’t “dig” ramps — he does not harvest the bulbs — which means taking out the roots too. By leaving those parts of the plant in the ground, he increases the odds that it will produce again next year.

But not everyone is as careful as he is.

them and didn't realize that you couldn't just lay waste to the entire patch and pull the whole things out,” Rapposelli said. “I was like, ‘oh, geez,’ You know, so I had to explain to him, you know, about sustainability and those types of things.”

Stories like this one raise questions about sustainability, but also about who profits from foods like ramps that are foraged from Appalachia and wind up on dinner plates in urban markets.

About a week before the dinner in Bomont, I’m standing in a wooded ridge in southeast Ohio. Scattered around me are a half dozen or so small patches of ramps. I discovered them a few years ago near my apartment in Athens, Ohio where I attend graduate school.

I’ve been telling Emily Walter about the patches for weeks, and she finally made it out to my place for a ramp tasting. She’s being careful too, cautiously using her car key to cut a single leaf from a healthy plant.

“Mmmm,” she says, chewing away.

Emily is relatively new to the world of ramps. This summer, she’s teaching environmental education workshops for Rural Action, a non-profit based in southeast Ohio. One of the organization’s focus areas is sustainable forestry in Appalachia.

It takes seven years for a ramp plant to produce a flower stock.

“Little dark-purple-y black berries that I think are wind dispersed,” she said. “And then they kind of migrate down the hill.”

Which brings us back to the ramp dinner in Bomont and the dozens like it that happen every spring in West Virginia and other parts of Appalachia.

“We live off the ramp dinner all year long,” said Krajescki. The annual ramp dinners are an important fundraiser for the elementary school. This year’s dinner netted $8,500 and that money funds school field trips, among other things..

“Students that have perfect attendance, we use this money to buy them a brand new bicycle at the end of the year,” Krajescki said. And every student in the school gets a Christmas present. “All that comes from the ramp dinner funds as well."

The dinner at Bomont has gone on for decades. Sandy Mitchell is in her 50s, and she remembers the dinners from her time as a student at the school. And she is part of the team that harvests ramps each year for the annual dinner.

“We spend two to three weekends before the ramps are really up, scouting them,” she said.

One spot this year was nearly at the top of the mountain. A place where acres and acres of ramps were growing.

“As far as you could see downhill out the hill and back up the hill, nothing but ramps," Mitchell said. "It was a sea of green."

The Bomont crew uses shovels to dig and they pack their ramps out in 30 pound feed bags, bulbs and all. But they never decimate a patch. In fact, they pretty much follow the 20% rule. “Where we dig, once we are done, you still can’t really tell we’ve been there,” said Mitchell.

And ecologist Amy Lovell said that ramps are doing just fine in the Monongahela Forest.

“They do seem healthy," she said. "And I don't think that we're at the point where we're seeing over-harvesting on the forest."

Lovell thinks the forest’s guidelines are working. That there is growing awareness about how to sustainably harvest ramps. Folks in Bomont say it’s simple logic.

“Common sense,” said Mitchell. "We have to leave a crop to grow and you can't decimate an area and expect that to grow back. That's just irresponsible.” 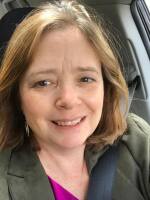 Laura Harbert Allen
Laura Harbert Allen (she/her) is an experienced audio storyteller who has contributed to and produced work for podcasts such as Making Contact, Us & Them, Freakonomics Radio and Inside Appalachia. She also has public media leadership experience as a program director and general manager at WEKU-FM near Lexington, KY.
See stories by Laura Harbert Allen
Discover The Impact Of WVPB
Learn More
WVPB Media App
Learn More
Latest News
WVPB Passport
All six seasons of Downton Abbey now available.
Hundreds of PBS Shows. On your schedule.
Learn More
It's the power of community.
WVPB is local news, education, music, and entertainment for West Virginia.
Your donation today will help keep us strong and vital.
Donate Now
Related Content