Jon Cooley has been making dulcimers for 25 years. He has sold hundreds of his instruments and hosted workshops at music festivals, mostly in Western North Carolina.

But, there is one thing that makes his dulcimers stand out. They are made of cardboard.

“I just started making them one day,” Cooley said. “I was out of work, I lost my job as a counselor, so I was like ‘I have to start doing something here’.”

This was in the mid-1990s, but Cooley’s journey began in the early 1980s. That was when he bought his first cardboard dulcimer kit at a music festival in New York. He discovered cardboard dulcimers were easy and cheap to make – they seemed perfect for kids and families who might not be able to afford instruments. So he started his own cardboard dulcimer business and began making dulcimers and teaching workshops.

Cooley’s dulcimers range in size and can be nearly 3-feet long. Unlike the hourglass-shaped Appalachian dulcimers, Cooley’s dulcimers are rectangular. He leaves some of them unpainted, so other people can customize them, with wolves, hummingbirds or flowers.

Cooley’s cardboard of choice is thick, recycled refrigerator boxes. This makes his instruments affordable, and durable.

"They're easy to make and easy to play," Cooley said. "You can build them with kids."

Of course, a cardboard dulcimer will not sound exactly like a wooden dulcimer.

“It’s not as crispy. I would say a wooden dulcimer is more crispy,” Cooley said. “Cardboard is a little more mellow.”

But do not mistake the cardboard dulcimer for a toy. It actually follows a long line of homemade or do-it-yourself Appalachian instruments. Appalachian Studies professor and folklorist Mark Freed says ingenuity has driven instrument design in Appalachia for centuries.

Take the Appalachian dulcimer — they were introduced to popular culture in the 1960s by folk musicians in New York City and mass-produced soon after.

But Freed says long before that, when the dulcimer was first introduced to Western North Carolina, community members built them based on a paper pattern.

“The story of that is that there was a guy who came through this area, right around the late 1800s or turn of the century, and he had a dulcimer," Freed said. "One of the local community members traced a pattern of that dulcimer, and that pattern got passed around and people in this area were making lap dulcimers.”

From there, community members were able to innovate and make instruments their own. And as we see with Cooley, instrument makers and Appalachians are still innovating.

Appalachian instruments were often distinct because instrument-makers had to deal with limited resources. Freed says the fretless mountain banjo is another example of this innovation.

“The mountain-style banjo, you know, has the smaller head, because this was the size of a stovepipe, or maybe of a coffee can," Freed said. "People were using what was available to them.”

In Boone, North Carolina, John Peterson is a renowned mountain banjo maker who still builds instruments by this ethos.

“The mountain banjos are a little more primitive or homemade looking than a factory banjo,” Peterson said.

Peterson has been making fretless mountain banjos for over a decade now. He learned to make banjos by watching other master banjo-makers and studying banjos he owned.

Peterson did not set out to make mountain banjos, he just wanted to play them in local bands while he lived in Fargo, North Dakota. Peterson says his fretless banjos and old-time music style made him a novelty in Fargo. Not many people had seen the unique instruments, which are typically found in Appalachia and the South. He remembers one night, an audience member approached him after he played in a coffee shop.

“This guy came up to me after the show and he asked me if I would build him 'one of those,' and I never built anything like that before, but I told him I would,” Peterson said.

So Peterson set out, studying banjos he owned from other local builders. The end result was a plywood banjo. It did the job, and since then he has made more than 700 banjos. But Peterson’s fretless banjos are not exactly like the ones one might find even 50 years ago. For example, he uses large #10 cans from restaurants as a combination tone ring and tension hoop. This is in lieu of a stove pipe.

Since stove pipes are not common anymore, Peterson says it makes sense to get the large cans from restaurants for free to use in their place. He is also happy to stick with calf and goat skins on the banjo head instead of squirrel or even groundhog skins, which were used for mountain banjos in the past. No matter the material he uses, Peterson’s dedication to preserving the craft and the unique form of the mountain banjo remains.

Peterson also makes other homemade instruments, like the “can-jo,” a scaled-down version of a banjo that uses a coffee can or tin can for the head. Some canjos only have a single string, but some canjos can have a fretboard, like a full-size banjo or guitar.

The canjo is mostly used as a craft project for kids, but folklorist Mark Freed said it follows in the spirit of Appalachian musical traditions, just like the cardboard dulcimer.

“People were resourceful," Freed said. "If you wanted to be entertained, you entertained yourself.” 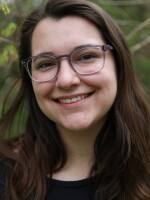