Valdese is a small town in North Carolina's Piedmont, and it shares a surprising amount of culture with the other Piedmont — the one in Italy. Valdese is known for crusty Italian bread, zesty Italian sausage and the Italian lawn bowling game of bocce. And for winemaking.

A few dozen Italian immigrants settled in Valdese back in the 1890s. They were "Waldensians" a group that had been persecuted for their religious beliefs in Europe. In North Carolina, they made wine at home and eventually set up a winery.

“Now that’s dry,” said Freddy Leger, as he uncorked a bottle and poured wine into a glass.

Leger was one of the founders of the Waldensian Heritage Winery. Leger died recently, but was interviewed at the winery about 10 years ago.

“My grandfather was one of the winemakers here in Valdese,” Leger said. “Whenever the Waldensians came here, they planted little vineyards. And a lot of the homes had little vineyards beside them. And their own wine cellars and so forth.”

How the Waldensians made wine changed over time. The first change happened when the Waldenses moved from Italy to North Carolina. There was different soil, a different climate, even different grapes. Leger proudly showed off a bottle of their most traditional wine.

“This is what we call Heritage," he said "And Heritage is 100% Concord wine."

The Concord is an American grape that's usually made into jelly or juice, but Leger said the Waldensians chose the Concord for their wines because it would grow here.

"We still use that," Leger said. "We wanted to do everything the same way that grandpa made it, so to speak."

The Waldensians saw winemaking as part of their family heritage — something to pass down through the generations.

Another local winemaker, Eddie Zimmerman, was introduced to the tradition by his great uncle.

“Uncle Henry Peru," Zimmerman said. "He was a Waldensian. He made wine."

"Just as a fellowship and friendship thing," Zimmerman said. "It was an insult not to drink a man's wine. “

Early experiences like that made a lasting impression on Zimmerman. He started helping out at the Waldensian Heritage Winery in the year 2000.

“Because, you know,, they needed the labor, they needed somebody that had the passion for it, “ Zimmerman said.

For 40 years volunteers from the community came out to help make the wine.

“A lot of people in town came and helped them mash grapes and stuff," Zimmerman said.

The Waldensian heritage winery closed its doors in November 2019. The old dairy barn was sold back to its original owners and turned into an event space. They don’t make wine there anymore.

But Eddie Zimmerman does. Both at home and commercially. In 2008 Zimmerman bought a winery a few miles down the road: Waldensian Style Wines. These days he makes mostly fruit-based wines.

"Most of my wines are sweet — things like blackberry and apple and peach," Zimmerman said. "That seems to be what sells at festivals."

Zimerman has added a few winemaking innovations of his own. About 10 years ago he took a slush machine to a festival.

"And it was so popular that when you go to a wine festival, everybody has slush machines," Zimmerman says. "And I'm the one that started that.”

But with wine festivals cancelled because of COVID-19, Zimmerman hasn’t made any wine this year. Not even for himself.

Zimmerman’s friend, Leger, was worried about the future of winemaking in Valdese he spoke about it 10 years ago. Young people didn't seem interested.

"I think that's gonna be one of the biggest challenges that we have,” Leger said.

Leger died in the summer of 2020. Eddie Zimmerman was at his funeral.

“I had a wine bottle of wine put in his casket with him,” said Zimmerman. “ I got permission from the family. We opened the casket back up and laid a bottle of wine in his arms. And he took that to the grave with him. He would have liked that.”

Leger would probably be happy to hear about people like Kevin Duckworth. He's one of the people in Valdese still making wine in his basement. Duckworth learned how to make wine about 30 years ago from his ex-father-in-law.

“He had the recipe because he was full-blooded Waldensian,” Duckworth said. “And I was an outcast. Or a blueblood as they called me. And it was some time until he actually shared the recipe with me.”

Duckworth had to promise to keep the recipe a secret. After his father-in law died, Duckworth stopped making wine for years. But he recently started up again.

Duckworth hopes that the winemaking tradition in this area, brought over from Italy, will continue. And he thinks his family will be a part of that. 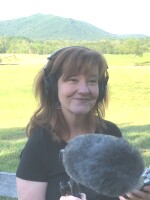