In Knott County, Kentucky, Gingerbread Is Remembered For Its Connection to Local Politics

When you hear the word "gingerbread," you might think Christmas. But in southeast Kentucky, when people of a certain age hear "gingerbread," they think Election Day.

In a special report as part of the Inside Appalachia Folkways Project, Nicole Musgrave, traces the surprising history of gingerbread in Knott County, Kentucky from everyday treat, to election time tradition, to fundraising champion.

Gingerbread Was A Household Staple

In her cozy kitchen in Hindman, Kentucky, LaRue Laferty watches over her teenage grandson, Jaxon Conley, as he makes a fresh batch of gingerbread. All of the ingredients are sitting on the green countertop of the kitchen island. So are the necessary tools, like metal baking sheets, measuring spoons, and a KitchenAid stand mixer.

Laferty, who is in her 80s, has a head full of short, white hair. She wears glasses and a green cotton face mask, and uses a walker to move around her kitchen. If you ask folks around Knott County who the best gingerbread bakers are, Laferty’s name usually comes up.

“I don’t really profess to be a gingerbread-making queen, but I do make a lot,” she says.

When she was growing up, gingerbread was a year-round household staple.

“Anytime we went to grandmother's, she had it,” Laferty says. “And my mother made it all the time, she kept it made.”

Knott County gingerbread isn’t crisp, snappy cookies, and it’s not moist, fluffy cake. It’s somewhere in between. Bob Young is a local historian born and raised in Knott County. He is in his 70s and he remembers most of the women in his family made this style of gingerbread.

“Gingerbread as we knew it here was just a glorified biscuit,” Young says. “And full, absolutely full of molasses.”

Before white sugar became easily accessible in southeast Kentucky, molasses was the primary sweetener. Every fall, sugarcane farmers hosted stir-offs. Folks gathered to watch as the sugarcane juice was boiled down to a sticky syrup, and they left with full jars to stock their pantries.

Aside from powdered ginger, the other ingredients—flour, fresh eggs, buttermilk and lard—were things people already had on hand. That made gingerbread inexpensive.

“Gingerbread was something that anybody, anybody nearly could get,” Young says.

Just A Nice Little Way To Ask For A Vote

One place you were sure to find gingerbread in Knott County was at the polls on Election Day.

“The candidates, they would hire good gingerbread makers in the community to make gingerbread, and they would give it out at the polls,” Laferty says.

In the 40s and 50s, when Young and Laferty were growing up, it was a common practice.

“Republicans on this side, and the Democrats on that side,” Young says. “And they were all giving you gingerbread. So by the time you voted, you'd have a handful of gingerbread...It was just a nice little way to ask for a vote.”

Laferty says, “they didn’t call it ‘buying votes’ but it’s about what it amounted to.”

Corbett Mullins, another Knott County native, remembers his grandmother as a sought-after gingerbread-maker.

“She would go with her baskets of gingerbread to the polling grounds and hand out the gingerbread in that candidate's name,” he says.

But during the 1960s, people began handing out something else.

“I hate to say it, but gingerbread was replaced by liquor,” Mullins says.

Then in 1974, Kentucky passed a law against campaigning within 100 feet of a polling place. This was the final blow for political gingerbread.

But surviving recipes may hold clues that link gingerbread and elections. Bob Young has noticed that a lot of recipes make huge batches, and he believes that’s because bakers were making gingerbread for the masses on Election Day.

“Why, some of those old recipes take a five-pound bag of flour,” he says.

How Much Ginger’s It Got In It?

These days, the annual Knott County Gingerbread Festival celebrates gingerbread’s ties to politics and features a gingerbread competition. There are lots of variations of this regional dessert, and everyone has their own preferences.

Mullins, who chaired the festival for decades, says texture is key.

“I have had gingerbread that's been as dry as the Sahara Desert,” he says. “As soon as you get it chewed up you have to have a drink of water to refresh your mouth.”

Young is focused on ginger.

“Sometimes it would almost burn your tongue,” Young says. “Some people liked it really hot. And that was one of the things they'll say, ‘How hot is this? How much ginger's it got in it?’”

Over the years, LaRue Laferty has placed in the gingerbread competition a lot. One year, she entered three batches using different recipes.

“I come in first place and tied myself on second,” she says. “So I didn’t enter any more for a long, long time after that, because I thought, well, that's good enough.”

The Knott County Gingerbread Festival was cancelled this year because of the pandemic, which was disappointing for Laferty.

“I threatened to go up there and set down on the street and put up a sign and have my own little festival,” she says.

During festival season, Knott County bakers typically sell gingerbread to fundraise for local causes and to earn extra cash. Even though this year’s festival was cancelled, Laferty’s daughter-in-law made close to 4,000 pieces of gingerbread, selling enough to raise nearly $2,000 for her church to pay its winter bills.

A Good Clean Way To Make a Little Extra Money

Back in the kitchen, the room is fragrant with the mingling of ginger, cinnamon, and clove. The oven timer goes off and Laferty takes out the pan. Once the gingerbread cools, her grandson, Jaxon Conley, takes a bite and assesses his work.

“I think it turned out pretty good,” he says. “It’s not too dry, but it’s still moist. And it’s still got the crispy edges on it, which I really like on gingerbread.”

Conley sold the batch he made to a relative. In the past, he has sold gingerbread at the local farmers market, to friends and neighbors, and to classmates at school. One year, he made enough to buy himself a bike.

Laferty is glad her grandchildren are continuing the Knott County gingerbread tradition, and it gives her comfort to know they have a skill they can rely on if they need to.

“Later on when they get a little older, and maybe they need some extra cash...maybe they can make some gingerbread,” she says. “It'd be a good clean way to make a little extra money.” 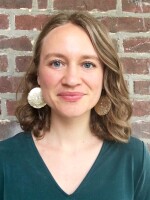