Arts & Culture
Inside Appalachia
Inside Appalachia tells the stories of our people, and how they live today. Hosts Caitlin Tan and Mason Adams lead us on an audio tour of our rich history, our food, our music and our culture.

More than a few families with strong musical traditions call Appalachia home. West Virginia alone has the Hammons and the Kessingers, talented kin known worldwide as bearers of musical traditions. But, for Lucas Pasley, a fiddler, banjo player and singer-songwriter from Alleghany County, North Carolina, family musical traditions were not some flowing stream to draw from. They were more of a deep spring, hidden in plain sight.

Lucas grew up in a family with more than its fair share of musical talent.

"They would sing for weddings, for churches, and for revivals," Lucas recalled of elder family members.

But, as his grandmother Ellen Brooks tells it, the family didn’t always appreciate musicians – especially fiddlers. She remembers the stern declaration of the family patriarch, Pa Butchie: "A man who makes music wadn't worth a hoot for another thing."

The family did eventually warm to fiddlers. But Lucas was well into his late teens before he connected with traditional music and his family’s musical heritage. He balanced his early experiences with music—hearing Ellen sing in church, listening to Gospel and Country songs—as his tastes drifted further into acoustic music.

"I felt like I was fumbling in the dark," Lucas said. "I knew I was hunting for something, but I didn't know exactly what it was."

It wasn’t until Lucas attended Appalachian State University that he began finding his way. He took up fiddle and banjo and he started going to old time jam sessions. That’s where he met a fiddler who would inspire and mentor him.

"I went to this jam somewhere in Wilkes County,” Lucas said. ”There was this old man there, and he was just amazing – the way he held the bow and the tunes that he played and the feel of it. It was just exactly what I was hungry for and I was so excited."

Shortly thereafter, he visited his grandmother Ellen. He still remembers what he told her: “I have found my hero fiddler. His name is Fred McBride.”

When she heard that, Ellen slammed the handle down on her recliner, shooting straight up in her chair.

"Fred McBride?” she said. “You've seen him at every family reunion you've been to since you were a kid."

Ellen remembers the moment with a chuckle.

"I just thought it was funny that he'd be with [Fred] every summer of his life at the family reunion and didn't know it,” she said.

The next week, Lucas went to see Fred and told him they were cousins.

The two would spend years visiting, with Fred influencing how Lucas approached his own fiddle playing.

"I think that dancing is the main thing that makes the music the way it is along the Virginia-North Carolina line," said Julie Shepherd-Powell, a professor at Appalachian State University who focuses on Appalachian music traditions.

Shepherd-Powell notes that even slow tunes are intended for people "to get up and two step or waltz.” But she said it's the hard driving fiddle tunes that are the backbone of the tradition. These are up-tempo tunes that make the dancers want to get out of their seats and flatfoot or clog. This style of fiddling requires a rhythmic sound—a characteristic shared by the fiddling of both Fred McBride and Lucas Pasley.

Shepherd-Powell sees other similarities between the two fiddlers – from the way they hold their instruments to their open-minded approach that blends old tunes with the new. She said Lucas is “willing to play all kinds of music, even though I would argue he is one of the best traditional old time fiddle players really steeped in the place where his music is coming from."

That connection to place runs deep for Lucas and his musical family. His great uncle Lawn Brooks (1893-1964) was a fiddle mentor to Fred McBride and composed several tunes, including “Bullhead Mountain Rag.”

Bullhead Mountain is within view of Ellen's house and it is a geographical hinge of the family's history. Lucas said the mountain was so important to his family that when Lawn’s mother was on her deathbed, she asked to be taken out onto the porch of the family home to see it one last time. These connections are not lost on Lucas.

"When I finally found our music…it was like a big family reunion somehow,” he said. “All of these cousins, all of Ellen's first cousins, once they found out I was interested in the music, just a whole world opened up in the family for me."

In fact, the family recently completed an album featuring four generations of songwriting, including songs by Lucas, his father, his 16-year-old daughter, and some penned by his 82-year-old grandmother Ellen almost half a century ago.

Ellen was thrilled to make an album with her family.

"I’ll be famous," she said with a wry smile. "I don’t write anything but good songs."

Trevor McKenzie is part of our Inside appalachia folkways reporting corps. And in the interest of full disclosure, Trevor performs on a few of the songs in the album Lucas Pasley produced, called "Souls Living On". 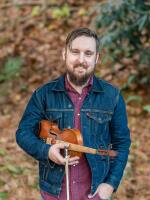