Christ IS Kept in Merry Xmas

Merry Xmas!  How many times do you see that during the holidays?  And every time it appears, I hear someone complain that we should not take the Christ out of Christmas!

But putting an X in place of Christ is not sacrilegious at all. In fact, it is an ancient and sacred way to honor both Christ and the early Christian martyrs.

In First century Rome, Christians were persecuted.  If they were revealed as being a Christian, they were arrested and forced to star in a new form of theatrical entertainment – thrown into an arena with lions, with the audience roaring as they were killed.

It was illegal to be a Christian and to worship in any way.

But, those early Christians were a determined people.  They held secret worship services deep in the catacombs, underground burial sites.  They would mark the outside of the catacomb with an X.  The X is the Greek letter Chi and is the first letter in writing the name of Christ. First century Rome was strongly influenced by Greek culture and learning and the Greek alphabet was common.

Furthermore, there was another nuance. Not only did the X stand for the first letter of Christ’s name, if you tipped it on its side, it becomes a cross.  So, X marked the place of secret place of worship.

I had a chance to visit one of those ancient catacombs when my sister and I toured the country of Malta, in the Mediterranean.   The guide led us down narrow corridors hewn from jagged rock. The stone floors were uneven and rough. On either side there were open shelves with exposed, ancient skeletons.

Deep in this underground maze, we came to an early altar. It had been fashioned out of stone in the 1st century.  Since it was protected from light and air, you could still see the remnants of deep red and blue paint.  Benches were also carved out of the stone so that about a dozen people could sit.   We each held a flashlight, and I could imagine the magic and mystery evoked when these early Christians met by candlelight to worship their Lord in spite of danger and persecution.

It was an inspiring experience.  Those people risked their lives to follow their faith.  I ask myself, if I lived in those times, would I have been so brave?    I like to think that I would, but how can I know?

We become complacent in the comparative ease of the 21st century.  We don’t speak out against injustice or hatred.  We don’t passionately support a cause or a belief. It is too easy to look away when someone else is in pain.

And so, in this season of long nights, we have the opportunity to look for our own light; to follow the path of our own maze, however jagged or rough.  Throughout time, every culture and every religion has found this season of darkness to be a time to hope for the light.

I wish for each of you the chance to find your own light. 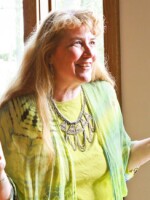 Karen Vuranch
Karen Vuranch is a storyteller, actress, historian and writer. Using solid historical research, she creates characters that bring history to life. She has toured internationally with ‘Coal Camp Memories’. Based on oral history, it chronicles a woman’s experience in the Appalachian coalfields. ‘Homefront’ is a play based on oral history she collected about women in World War II.
See stories by Karen Vuranch
Discover The Impact Of WVPB
Learn More
WVPB Media App
Learn More
Latest News
WVPB Passport
All six seasons of Downton Abbey now available.
Hundreds of PBS Shows. On your schedule.
Learn More
It's the power of community.
WVPB is local news, education, music, and entertainment for West Virginia.
Your donation today will help keep us strong and vital.
Donate Now
Related Content