As the third wave of COVID-19 continues to infect people, new data shows that many hospitals in the Ohio Valley are under strain, running short of bed space, especially for the most critically ill. The following graphs show how the pandemic is affecting hospital capacity in Kentucky, Ohio and West Virginia.

The data released by the Department of Health and Human Services last Monday gives first insight into how individual hospitals across the country are doing.

The data, based on reports by hospitals to HHS, shows that the rise in COVID-19 hospitalizations is putting pressure on the healthcare system with hospitals in several dozen counties in the region running either at capacity or dangerously close. For this data analysis, the ReSource used the 7-day averages for hospital capacity in Kentucky, Ohio and West Virginia for the week starting November 27.

According to the Institute for Health Metrics and Evaluation at the University of Washington, if the number of beds occupied by COVID-19 patients is greater than 20%, it is considered “extreme stress”. More than 10% of beds occupied could mean “high stress”.

That surge of patients is straining capacity. Hospitals in 22 of the 192 counties in the regional data reported running at more than 90% capacity. Fourteen of those counties are in Kentucky.

The pressure is especially great for intensive care units. Hospitals are running out of ICU bed space as 28 counties used more than 90% of capacity during the week of November 27.

Fayette and Jefferson counties, home to Lexington and Louisville, are the state’s most populous counties. But this wave of the pandemic has spread well beyond cities, bringing the effects of viral community spread to smaller towns and rural counties. .

As the ReSource has reported, COVID-19 has left rural hospitals with fewer beds while losing their nursing staff as more fall ill or must quarantine due to the virus.

While the vaccine has been rolled out, it would take months to vaccinate a substantial population and to reach a point where people won't be asked to follow guidelines to stop the spread of the virus.

Meanwhile, the hospitals in the Ohio Valley will likely continue to be strained especially at a time when cold weather forces people to stay indoors, which experts say increases chances of people getting sick. And as Christmas is around the corner, there is a likelihood of further increase in infections if people don’t take recommended precautions such as limiting the size of gatherings, mask wearing and social distancing.

With several hospitals running at capacity, a surge in hospitalizations in the next few months might put the Ohio Valley’s health care system in crisis. 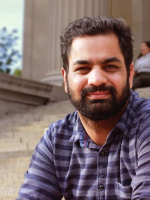 Suhail Bhat
Suhail Bhat is a data journalist and 2020 graduate of the Data Journalism program at Columbia Journalism School. Before attending Columbia, he was a correspondent at Reuters, where he covered Asian corporate news and Wall Street for four years.
See stories by Suhail Bhat
Discover The Impact Of WVPB
Learn More
WVPB Media App
Learn More
Latest News
WVPB Passport
All six seasons of Downton Abbey now available.
Hundreds of PBS Shows. On your schedule.
Learn More
It's the power of community.
WVPB is local news, education, music, and entertainment for West Virginia.
Your donation today will help keep us strong and vital.
Donate Now
Related Content