UNIDENTIFIED SPORTSCASTER: The long wait has ended. After a half century, the Milwaukee Bucks are NBA champions once again.

CHANG: And they are celebrating Bucks superstar Giannis Antetokounmpo. He led the team to victory with 50 points, a resounding performance with an astounding history. His parents emigrated to Greece from Nigeria. He only learned to play basketball as a teenager while selling trinkets on the street to make ends meet. When he got to Milwaukee, he was dubbed the Greek Freak - for his athleticism - but nobody was predicting that he would win two MVP titles and now a championship, not even him.

GIANNIS ANTETOKOUNMPO: Man, I never thought, you know, I'm going to be 26 years old, you know, with my team playing in the NBA Finals - just playing and, like, you know, not even winning, just being a part of this journey.

CHANG: Well, how he got from Athens to the pantheon of basketball is, incidentally, the subject of Mirin Fader's forthcoming book "Giannis." Mirin Fader joins us now.

MIRIN FADER: Thank you for having me.

CHANG: Thank you for being with us. So I've got to say, that is pretty great timing on your part to be releasing a biography of Giannis right when he becomes the star of the championship team. Did you see this NBA title coming for the Bucks this year?

FADER: Absolutely not. I mean...

FADER: I got messages from my friends, saying, are you a witch? - because you must have clairvoyant powers.

CHANG: I love it.

FADER: Yeah. No, this was so incredible. Bucks fans have suffered for so long with mediocre teams, losing seasons. It was an incredibly euphoric day in Milwaukee yesterday and today and for a very long time.

CHANG: Well, for those who have not been watching basketball very closely these days, paint us a picture - like, what is Giannis like to watch on the court?

FADER: Giannis is probably one of the most passionate, most intense athletes on the planet. He is competitive as heck. He is the master of work ethic, and he's pretty freakin' (ph) dominant. When he's traveling all the way down court, and he gets past the free throw line, really the only choice defenders have is to foul him because he's going to dunk on them.

CHANG: Wow. So I just want to step back a little bit because I know that you have done so much reporting on his own life story. What was it like for him to grow up as a Black boy in Greece?

FADER: It was extremely challenging. Not only was he Black in a majority-white country, but he was undocumented and - because even though he was born in Greece, he was not granted citizenship because Greece does not have birthright citizenship. So he would often be at away games, and people would shout racist insults at him from the stands. And so Giannis always grew up with this feeling of being an outsider.

CHANG: And how did he find basketball as a teenager?

FADER: A man named Spiros Velliniatis just spotted him and his brothers just playing tag, running around one day. Spiros introduced him to a club named Filathlitikos, and soon Giannis was playing. And Milwaukee takes a chance, drafts the guy without knowing his medical information, and holy crap.

CHANG: Well, you know, listening to Giannis' reaction after the game, you can hear the - just the raw emotion in his voice. And then I saw he celebrated today by ordering a 50-piece chicken nugget meal for his 50 points with his NBA trophy beside him.

CHANG: I love it. Mirin Fader, sportswriter and author of "Giannis: The Improbable Rise Of An NBA MVP."

Thank you so much for joining us today.

FADER: Thank you for having me. 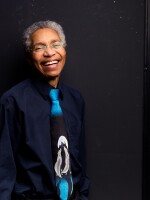