The coronavirus pandemic for months has upended the daily work of Congress, sickening dozens of members and hundreds of workers.

A sitting Congressman, a member-elect and an aide have died.

In February, Texas Republican Rep. Ron Wright died after a more than two-week battle with the illness. In December, Louisiana Congressman-elect Luke Letlow died days before he was due to be sworn in. And this past summer, a Florida House member's aide died from COVID-19.

Wright marked the first sitting member of Congress to die after his diagnosis. His office said he had also battled cancer in recent years.

"As friends, family, and many of his constituents will know, Ron maintained his quick wit and optimism until the very end," a Feb. 8 statement from Wright's campaign office said. "Despite years of painful, sometimes debilitating treatment for cancer, Ron never lacked the desire to get up and go to work, to motivate those around him, or to offer fatherly advice."

The Capitol has seen an influx of outbreaks throughout the pandemic. By February, more than 60 lawmakers and 360 workers have tested positive, or were presumed so, for the illness, according to NPR's tracker and Congressional aides.

Most recently, the Jan. 6 violent insurrection at the Capitol forced members to cluster together in rooms for several hours. Some House Republicans were seen not wearing masks during the ordeal, and refusing to do so.

And at least one holding room for House members included a lawmaker who was already positive, the Capitol Attending Physician Dr. Brian Monahan told Congress.

More than a half dozen members quarantined as a result and several tested positive, including Democratic Reps. Bonnie Watson Coleman of New Jersey and Brad Schneider of Illinois.

In all, January prove to be the worst month for members and the illness on Capitol Hill with at least 17 lawmakers testing positive. Before the insurrection, the House met to launch a new Congress before reinstating rules allowing proxy voting.

This, as Congressional leaders and dozens of lawmakers have received the Pfizer-BioNTech COVID-19 vaccine, which became available to members beginning in December.

The doses were provided to meet long-standing requirements for continuity of government operations, Monahan told members in a Dec. 17 note.

Ahead of the vaccinations, both chambers of Congress recessed multiple times throughout the year as the Capitol went largely without a widespread testing program.

The Democrat-controlled House installed emergency proxy voting and remote hearings in May, and House Speaker Nancy Pelosi has extended the covered period several times due to the pandemic and it remains in place until at least early April 2021. And in November, Pelosi triggered a broader COVID-19 testing program for Congress following new requirement for travelers to the Washington, D.C., area.

In December, at least nine House members, including six Republicans, tested positive for the illness. And November proved to be the second worst month of the pandemic for members of Congress, when at least 15 lawmakers said they were infected, including two of the oldest, Republican Rep. Don Young of Alaska and Sen. Chuck Grassley of Iowa.

It was one of several instances forcing leaders to change the schedule.

The Senate returned in May, but the much larger House still stayed mostly away under the advice of Dr. Monahan. That same month, the House approved historic rule changes to allow remote voting and hearings.

The initial rash of cases began March 8, when two Republican lawmakers, Sen. Ted Cruz of Texas and Rep. Paul Gosar of Arizona, were the first members of Congress to announce self-quarantines. Both attended the Conservative Political Action Conference in National Harbor, Md., where another guest fell ill.

The following week, the first two members of Congress said they tested positive for the coronavirus illness. Republican Rep. Mario Diaz-Balart of Florida and Democratic Rep. Ben McAdams of Utah both said they developed symptoms after a March 14 vote on a coronavirus relief package.

By this summer, dozens of Capitol workers reported a positive test or were presumed so, and Gary Tibbetts, a longtime staffer for Republican Rep. Vern Buchanan of Florida, died from COVID-19 on July 24.

Some lawmakers have taken antibody tests to see if they were previously ill. Among them, Democratic Sens. Tim Kaine of Virginia and Bob Casey of Pennsylvania both said they tested positive months after experiencing symptoms in the spring.

To stem the flow of new cases, both chambers early on issued new social distancing guidance. Also, the U.S. Capitol closed to public tours and open only to members, staff, press and official business visitors, and aside from the Jan. 6 breach by pro-Trump extremists, has remained so.

This story was originally published on April 15, 2020.

A previous version of this story incorrectly identified Rep. Joe Cunningham of South Carolina as a Republican. He is a Democrat. 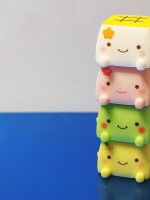 Audrey Carlsen
WVPB is your window to the world.
Your gift keeps the best in public broadcasting on the air.
Make A Gift
Enter The 2021 PBS Kids Writers Contest
Learn How To Enter
Latest News
WVPB Passport
All six seasons of Downton Abbey now available.
Hundreds of PBS Shows. On your schedule.
Learn More
All West Virginians Can Now Pre-register For The COVID-19 Vaccine
Pre-Register Now
It's the power of community.
WVPB is local news, education, music, and entertainment for West Virginia.
Your donation today will help keep us strong and vital.
Donate Now