Since the very first U.S. Census in 1790, the government has changed its definitions of racial categories more than 10 times. This week, NPR's Invisibilia podcast looks at the shifting boundaries around race and the continuing challenge over who belongs in which racial box. Here's NPR's Yowei Shaw.

YOWEI SHAW, BYLINE: When Richard Alba wrote a piece about race for The New York Times, he was hoping to get buzz but not on white supremacist sites like The Daily Stormer.

RICHARD ALBA: And they had this funny picture of me, and they had imposed a lavender Star of David on my forehead.

It was 2015, and Alba, a sociology professor at the CUNY Graduate Center, had written about Census Bureau projections, forecasting that the U.S. population would no longer have a white majority by midcentury.

ALBA: The projections imply a picture of two great blocs of people. And implied is a kind of contest for power in the largest sense.

SHAW: But it wasn't just white supremacists who fixated. When the census first started publishing projections about a majority-minority crossover, people of all political stripes paid attention.

UNIDENTIFIED PERSON #2: White people - they used to be everywhere.

UNIDENTIFIED PERSON #3: The idea that whites will not be the majority - it's an exciting transformation of the country.

UNIDENTIFIED GROUP: (Chanting) You will not replace us.

MARIA ABASCAL: People don't like change in general - right? - and this is a big change.

SHAW: Maria Abascal is a sociology professor at Columbia University. And she says that a slew of reputable studies have shown that white people react with fear and anger when they hear about their future shrinking numbers.

ABASCAL: Yeah, so we know that they're more likely to express sympathy for other whites. They express more negative attitudes toward minorities. They are less supportive of redistributive policies like welfare.

SHAW: White people might even be redefining whiteness. Abascal recently conducted a study in which whites were presented with photos of various Latinos. And she found that when told about future white decline, whites were less likely to classify the faces as white, compared to those who hadn't heard about the projections.

ABASCAL: Whites who identified with the Republican Party and whites who voted for Trump in particular were even less likely to classify ambiguous people as white under demographic threat.

SHAW: In other words, white people were guarding the white category more closely.

ABASCAL: It seems like a very straightforward way to fight numeric decline is to recruit more people into your group, but that's not what we saw.

SHAW: But what if these census projections weren't realistic?

ALBA: The more I dug into the data, the bigger the problem looked to me.

SHAW: At first, Richard Alba accepted the projections like everyone else. But then he discovered that in 2000, when the census started allowing people to check more than one box, if you checked the white box plus any other box - like Black, Asian, American Indian or Hispanic - the census would count you as a minority.

SHAW: Now, the government does this, in part, for civil rights enforcement. But Alba thinks that this accelerated white decline in recent census projections, when really, Alba says, the number of multiracial people is growing. And they can identify in all kinds of ways, sometimes as white.

ALBA: And the problem with the projections is that it - they can't take this fluidity into account.

SHAW: Take the case of Hannah Liu and her brother Allen, who have a white Jewish mom and a Taiwanese immigrant dad. Today, at 25, Hannah identifies as mixed race, Asian American and definitely not white, though she says people are sometimes surprised.

HANNAH LIU: I also have told people that I identify as a person of color. And they've said no, you aren't.

SHAW: So when Hannah was hanging out recently with her brother Allen and he said something about having white privilege, she was confused.

H LIU: Because we have the same parents and the same racial makeup, and I don't really think about myself as having white privilege.

SHAW: Though Hannah says she does have what she calls light skin privilege.

H LIU: And I said, but you're not white. And he said, yes, I am. And it really freaked me out. I was like, oh, no. Am I white? - because I generally trust his opinion, and I think he's really smart.

SHAW: Should we call him and see if you have a white brother?

SHAW: Allen was nice enough to take our call and to explain himself to his sister.

A LIU: I feel like people default assume that I'm someone to be listened to in nearly every situation that I come across with very few exceptions. So given that I experience these things that sounds like white privilege and I'm ethnically at least part white, then that makes me as a white person.

SHAW: So just to clarify, you do see yourself as white?

A LIU: Yeah, I say I'm white. I'm also East Asian, among my other possible identities as a Jewish person and as a 21-year-old college student.

SHAW: Oh. Hannah, did you catch that?

SHAW: Of course, today with the coronavirus and reports of anti-Asian harassment on the rise, it's hard to say how this will affect people like Hannah and Allen, how their race will be perceived by other Americans. And it's important to note that even if the census used a more inclusive definition of white, a lot of sociologists told me that the U.S. is still on course to becoming a much more diverse country, which is why how you tell the story of demographic change matters.

A study by Dowell Myers and Morris Levy at USC found that when white participants read projections stressing a white majority with increasing diversity, they were much less anxious and angry than those who read projections merely emphasizing white decline, which has led to a personal revolution for demographer Dowell Myers.

DOWELL MYERS: I've become much more fixated on the idea of demographic narrative, which I always thought was just sort of, like, sort of backroom gossip. That's actually what drives elections. It's not the main facts in the report. It's the narrative about it.

SHAW: The Census Bureau says it has talked to Alba and other race scholars about all this and is now thinking hard about how to present their racial projections. In the most recent published projections, they didn't list a date for the majority-minority crossover, and they didn't use the phrase majority-minority. But that hasn't stopped the media or academics or even white supremacists from doing their own math.

CHANG: In the current episode of NPR's Invisibilia podcast, Yowei Shaw looks at which racial box a city council candidate struggles to fit into and the political consequences for an entire city. 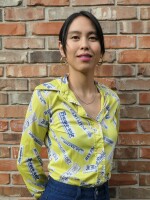 Yowei Shaw
Yowei Shaw is co-host and editorial lead of NPR's Invisibilia. Her work on the show has taken listeners into the uncomfortable world of racial preferences in dating and whether you can change them, an unlikely love story in martial law era Taiwan and a Midwestern town sharply divided in how it sees wild black bears.
Discover The Impact Of WVPB
Learn More
WVPB Media App
Learn More
Latest News
WVPB Passport
All six seasons of Downton Abbey now available.
Hundreds of PBS Shows. On your schedule.
Learn More
It's the power of community.
WVPB is local news, education, music, and entertainment for West Virginia.
Your donation today will help keep us strong and vital.
Donate Now
Related Content