Even as the rate of hate crimes has increased over the past few years, Indiana has remained one of just a handful of states without a law specifically banning hate crimes. But it wasn't always that way. Indiana was actually one of the first states to outlaw hate crimes in the mid-20th century. Jennifer Weingart of member station WVPE in Indiana has that story.

JENNIFER WEINGART, BYLINE: Shortly after World War II, the United States War Department released a film to warn Americans about the rise of Nazism through hatred.

WEINGART: In the film, an actor on a soapbox tells the crowd to stand up for, quote, "real America," that he sees African Americans and immigrants taking jobs from real Americans.

UNIDENTIFIED ACTOR #1: I see Negroes holding jobs that belong to me and you. I ask you, if we allow this thing to go on, what's going to become of us real Americans?

WEINGART: Another actor who plays a man from Hungary looks worried. He says he's heard something close to that before from Nazis in 1932 Berlin.

UNIDENTIFIED ACTOR #2: (As character) I never expected to hear it in America.

UNIDENTIFIED ACTOR #1: (As character) What are we real Americans going to do about it? You'll find it right here in this little pamphlet - the truth about Negroes and foreigners.

WEINGART: The same year that film was released to the public, state lawmakers in Indiana passed what was called the Indiana anti-hate act, possibly one of the first anti hate laws in the country.

STEPHEN SMITH: The law was motivated by the right kinds of concerns, but the legislature went about it in the wrong way.

WEINGART: Stephen Smith is a criminal law professor at the University of Notre Dame who's one of just a few people still familiar with the 1947 Indiana law.

SMITH: The law had had serious First Amendment problems. It was used to trench on activities that we would consider protected activities - free speech, organizing, protest activities.

WEINGART: A decade and a half later, in 1963, that was the weakness of the law that a young member of the American Nazi Party targeted. His name was Alexander DeFields. He moved to South Bend, Ind., from Michigan in a strategic move to organize for the American Nazi Party just as the civil rights movement was heating up. That year, he distributed anti-Semitic and racist leaflets for the party on cars outside of a bowling alley. He was later arrested for violating the Indiana anti-hate act. The case had been largely lost to history. Libby Baker and Judy Shroyer of the Michiana Jewish Historical Society came upon the case.

JUDY SHROYER: The Jewish Federation of St. Joseph Valley had kept a box of correspondence and newspaper clippings and whatever having to do with threats and statements that could be considered anti-Semitic. And so Libby and I decided to start going through that box to see what we could find.

WEINGART: What they found was a sheaf of newspaper articles from DeFields' case in 1964.

SHROYER: (Reading) DeFields says he will not only contest the accusation but also the constitutionality of the Indiana law passed in 1947 which forbids passing out leaflets or making statements defaming a certain race or religion - from the News-Palladium February 20, 1964.

WEINGART: The law had also caught the attention of a lawyer from the Indiana American Civil Liberties Union, Thomas Shaffer. Shaffer represented DeFields in his motion, saying the Indiana anti-hate Act was unconstitutional. Here, Shaffer is remembered by his friend and colleague Rick Garnett from the Notre Dame Law School.

RICK GARNETT: He was on our faculty, but he was doing that case pro bono because of his commitment to the principles of free speech even for people who were saying things that he didn't like.

WEINGART: Shaffer died in February, but he left behind thousands of pages of writings, including this reflection on the DeFields case from a 1988 law journal article on ethics.

GARNETT: (Reading) I did not like Nazis, and I did not like having this man for a client. I said I was defending the Constitution. As is often true in civil liberties litigation, I did not meet my client. I did not think of myself as representing him. My professional influence on my client, if any, was remarkably indirect.

WEINGART: Still, they won the case. The Indiana anti-hate act was ruled unconstitutional. Indiana courts mostly stopped using the law after that decision, and it was quietly taken off the books in 1977. Alexander DeFields died in 1983. The group he belonged to, the American Nazi Party, did not respond to requests for an interview. Since his case, 45 states have passed anti-hate laws. As for Indiana, just this year the governor signed a law that allows for extra punishment for crimes that are motivated by discrimination. That law goes into effect this month, but critics say it doesn't go far enough. It fails to mandate judges prosecute when a hate crime has been committed, and it does not include age, sex or gender identity as protected classes in the state of Indiana. For NPR News, I'm Jennifer Weingart in South Bend. Transcript provided by NPR, Copyright NPR. 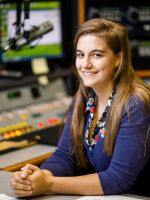 Jennifer Weingart
Jennifer Weingart is a reporter and All Things Considered host. She holds a degree in broadcasting and journalism from Central Michigan University, prior work experience from WCMU in Mt. Pleasant, Mich. and WDET in Detroit. She likes stories that involve passionate people doing awesome things. Her work is heard on WVPE, the Michigan Public Radio Network, Indiana's regional journalism cooperative and a few times on NPR.
See stories by Jennifer Weingart
Discover The Impact Of WVPB
Learn More
WVPB Media App
Learn More
Latest News
WVPB Passport
All six seasons of Downton Abbey now available.
Hundreds of PBS Shows. On your schedule.
Learn More
It's the power of community.
WVPB is local news, education, music, and entertainment for West Virginia.
Your donation today will help keep us strong and vital.
Donate Now
Related Content