Author Walter Dean Myers meets some of his young fans in a classroom at a juvenile detention center in the South Bronx. Though the audience members walk in wearing prison jumpsuits and sit slumped in their chairs, don't be fooled by the attitude: These kids have read some of Myers' dozens of books and are here because they want to meet the author.

Myers' books tell stories that many in the audience are all too familiar with — stories about being insecure for lack of a dad, being scared to walk in your neighborhood, being viewed as a criminal monster.

Growing up, Myers lived with his adopted family in Harlem, not far from this Bronx detention center. He was tall, with a speech impediment that elicited teasing. He got into his share of fights and run-ins with the law. But he was also bookish, and he knew he wanted to be a writer.

The only problem was that all the authors Myers read in school were white and British. Then one day in the 1950s, he met Langston Hughes in Harlem.

"He didn't look to me like a writer because he wasn't white," remembers Myers, now 70 years old.

Myers also discovered Richard Wright, whose memoir, Black Boy, told of a troubled childhood in Natchez, Miss. It's a powerful book that details racism, extreme poverty and brutal violence. Some African-Americans struggled with it:

"James Baldwin and Wright had this clash," Myers says, adding that Baldwin said "that when he read Black Boyhe was both pleased with it, because it mirrored some of the things that happened to him, and he was upset with it, because he felt that Wright had glamorized in a negative way some of his earlier upbringing."

Baldwin's charge that Wright had glamorized the negative aspects of his story stayed with Myers. When he wrote his own memoir, Bad Boy, Myers says he wanted to show "a duality of characters more clearly than Wright had."

One aspect of his life that Myers omitted from his memoir was his mother's alcoholism. He says that if he were to write Bad Boy again, he would write more about what he calls "the burden I carried with me every single day."

Myers understands that there must be a lot weighing on the minds of the kids at that Bronx detention facility. He shows them old photographs depicting various aspects of African-American life, which he uses to help flesh out the characters in his books. Myers started gathering photos while doing a writing workshop in Jersey City. Today, Myers has over 10,000 of them.

"The kids were writing such negative stuff about themselves that I began to collect photographs to show how beautiful they actually were," he says. "I used the photographs in a number of different books."

During his talk the at the detention center, the kids who slouched in the chairs when he first started speaking lean in to listen. One girl tells Myers that she regrets not being as "book smart" as she wants to be.

"One of the things you can do is start writing," he tells her. "What you're saying — other young people want to hear [it]. If you're interested, I am." 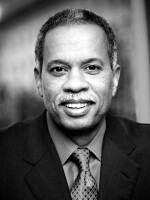